The first snow of winter dusted Hangzhou's "water lily" stadium – the Hangzhou Olympic Sports Center – with an even more intense white than usual. On December 11, 2018, Hangzhou was playing host to the FINA World Swimming Championships (25 m). Swim teams from around the globe battled it out in some of the swimming world's most exciting events. 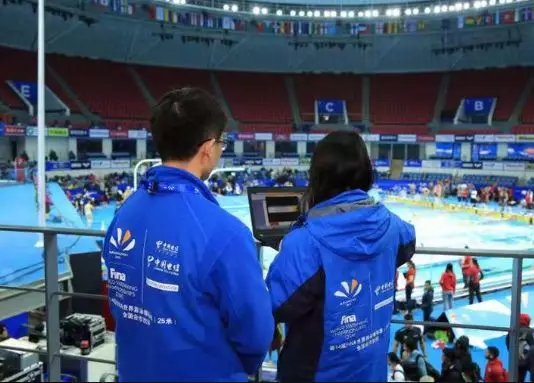 Hangzhou went sports crazy for the duration, and took the opportunity to present itself as a responsible international city.

China Telecom was the event's exclusive telecoms partner in China, and committed itself to creating smart championships so that it could deliver a compelling sports experience. This was the first live event broadcast in incredible 360° virtual reality (VR) over 5G. What kind of connection could they provide over this massive arena? Could the latest data be projected on the big screens instantly? Would they be able to channel high-definition (HD) video streams through their broadcast center? As the crowd roared, a series of smart World Swimming Championships were just beginning.

All weather, all angles, all the time
Committed to all-action World Swimming Championships

China Telecom delivered comprehensive, guaranteed telecommunications services to the event itself, to the organizing committee, the media, security services, and to all the athletes and audiences. Every image broadcast to sports fans, and every moment inside the arena, was supported by China Telecom networks.

For example, the stopwatch system is a crucial part of the races. It measures the times that will become part of an athlete's permanent competition record. 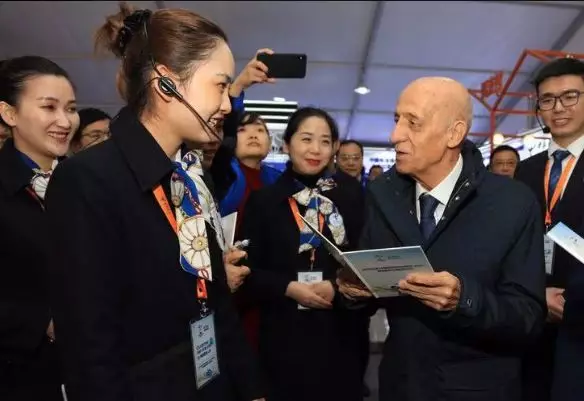 The Swiss Timing, and the organizing committee of the Hangzhou Championships, required that during a race, the moment a swimmer's hand touches the wall when they finish should be recorded through a local area network with pressure points, and the times instantly transmitted to the arena screens and the CIS terminals all around the stadium. The networks for transmitting these scores were delivered by China Telecom, and were able to deliver the scores to the screens and the terminals as fast as possible, so that the technical officials, commentators, and audiences could immediately see the athletes' results.

On the first day of the championships, the networks worked flawlessly, with virtually no time lag between an event and its appearance onscreen. To deliver this excellent performance, China Telecom worked around the clock, laying and connecting miles of fiber optic cables and opening dedicated Internet access within two days. During the championships, a dedicated team managed the networks to ensure that all systems were running smoothly.

CCTV was broadcasting more intensive coverage than for any previous world swimming championships. Inside the CCTV broadcast center onsite, there was a studio, an editing suite, and a surround sound audio room. All of the live and recorded footage from the games passed through here as it was prepared for broadcast on the CCTV-5 and CCTV-5+ channels. 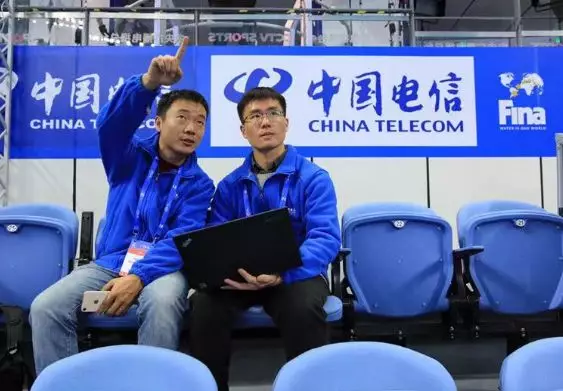 China Telecom provided double connections and redundant equipment to ensure that the broadcast signal would never cut out. There were also additional CCTV studios on the Baoshi Hill overlooking Hangzhou's iconic West Lake, and on the roof of the International Expo Center. China Telecom assigned dedicated teams to monitor the connections to these offsite studios, working in close partnership with CCTV teams.

In addition to these high-bandwidth connections, China Telecom also assigned a satellite truck to support the live broadcasts. In this way, it guaranteed a stable, fast, and instant link for the TV signals to go out to millions of sports fans in China and all around the world.

5G experience is the gateway to the championships
Powerful, flexible new technologies

The 5G+360° VR broadcast was one of the highlights of the Hangzhou World Championships. In a matter of just days, China Telecom built an experimental 5G network covering the Olympic Sports Center, the broadcast studio, the control room, and the Intercontinental Hotel (the headquarters for the championships). Within this area, it was able to offer the latest 5G experience.

This included the "5G journey" around the championships, beginning on the north bank of the Qiantang River. Invited guests got on a 5G experience van, and saw for themselves 16-input HD videos, footage shot on 5G drones, and a 5G VR video, bringing them the beauty of Hangzhou's scenery in immersive detail. It was an undeniably cool experience, and something that visitors had never seen before. 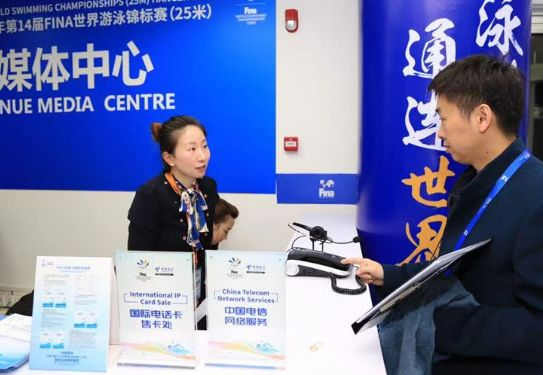 If you picture the 5G experience van as a phone, then it's a phone that can receive 16 different HD video streams at the same time. That means it can download data from 16 different sources. With the high bandwidth of 5G, 4K images can be perfectly presented on a large screen without losing any frame.

Hangzhou is a city that has embraced the digital economy. Every minute and every second, every bit of data is contributing to the city's progress in the form of big data and cloud computing. China Telecom's 5G services during the Hangzhou World Swimming Championships set a new standard for international sports events, opening them up to viewers in a whole new way.

One of the new features of the world swimming championships was the market and the Water Carnival at the entrance to the Olympic Sports Center. China Telecom had an intelligent exhibition hall, bringing visitors 150 square meters of the very latest, very smartest communications technologies and products. The stars of the exhibition were 5G HD videos, seamless 5G upgrade (city model), 5G speed tests, cloud graphics rendering, a 5G-powered, remote-controlled excavator, and a rock-paper-scissors robot.

The rock-paper-scissors robot was an instant online celebrity. Equipped with 4G LTE and 5G technology, it has been called a mind reader for its spooky ability to always win at the game. Audiences flocked to see it and to try to break its perfect record. China Telecom and Hikvision also unveiled the 5G-powered 8K video on demand (VOD). With 5G, audiences enjoyed truly immersive experiences of 8K videos that have the same level of definition as human vision. 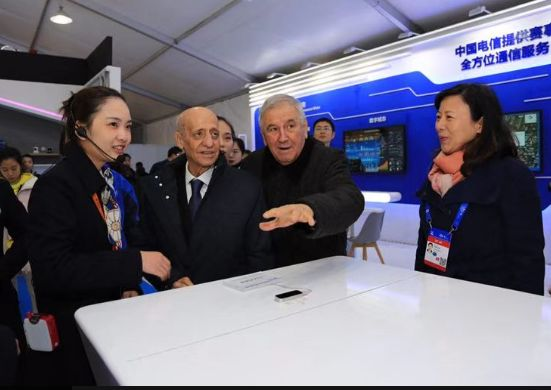 As the games unfolded, visitors to the stadium were also able to try out the 5G, 360° VR experience provided by China Telecom and Huawei. The VR experience was in pin sharp 4K resolution, filmed in 360 degrees. The 5G network transmitted images from the races at blinding speed, transporting sports fans instantly into the natatorium, with the athletes battling in the pool. Users could also take a virtual walk outside the stadium, and along the beautiful banks of the Qiantang River.

Hangzhou, China's leading city in digital economy, is upgrading its digital technologies so that advanced technology can take sports even further. China Telecom announced that in the next few days it would be redoubling its efforts to deliver stunning and unique World Swimming Championships. The company aimed to live up to the expectations of the organizing committee and the world, using its networks, technologies, expert team, and extensive experience, and through skillful use of advanced technologies such as 5G, IoT, cloud, big data, and IPv6.