The 7th King of City tournament kicked off in April and is a nationwide e-sports tournament hosted by Tencent Games every year.

The tournament comprises three stages: open qualifiers (April–July), provincial qualifiers (late July–early September), and the national championship (starting on October 26). Gamer teams from any province or city in China can sign up for the tournament freely. The team that makes it all the way to the national finals and wins the championship will qualify for the finalist competition for the King Pro League (KPL). That means, the team will get to be at the KPL to compete as a professional team and become e-sports stars.

On August 4, Tencent Games and Huawei collaborated on a provincial game held in Hebei. They transmitted the game video to the Hebei IPTV broadcast control platform using 5G. IPTV subscribers of China Telecom Hebei were hence provided with personalized, multi-dimensional viewing experiences that featured multi-screen and multi-view display. The King of City tournament, having been held six times already, is seeing some interesting changes.

E-sports games are characterized by grand scenes and numerous details. You can find both hand-to-hand combat by individual players as well as subtle tactics made through teamwork. As all members of competing teams do their best to fight a battle of wits and courage, the tides of the battle are constantly turning.

For the audience, the best way to watch a game is to freely switch between a global perspective and a partial perspective, so that they can both see the big picture of the game while experiencing the fierceness of the battles from closer up.

However, traditional e-sports live streams are not at this level. The images that the audience can see are pre-determined by producers, and the audience cannot switch between different views as they want. In addition, as e-sports live streaming presents large amounts of information at a fast pace, it will inevitably fail to satisfy the interest of some viewers, whether a global or partial perspective is shown.

The multi-screen, multi-view approach to watching e-sports games is a solution to such a problem.

The live broadcasting of the Hebei Finals of this King of City tournament provided four channels of video signals, each representing a different view of the game: The first view presented images of the main battle, the streamer, and the atmosphere of the gaming site. The second and third views respectively showed the red and blue teams' moves and plays. The fourth view showed the battles of competing teams in the "jungle" and the surprise "gank" attacks there.

Simultaneous broadcasts in the four views provided the audience with a new multi-dimensional game viewing experience.

One large screen and three small screens were displayed together to present the four views. IPTV users could use a remote control to set which view was shown in the large screen for a personalized viewing experience.

For example, if users were interested in the red team or blue team, they could put that team's view on the bigger screen. If they were only interested in seeing the main battle without being distracted, they could watch it in full screen for an immersive view.

The multi-screen, multi-view application meets every need of the users. They can freely go back and forth between a global perspective and a partial one to get up close with more dimensions and watch games in a more personalized way. E-sports live streaming thus becomes more exciting and delightful to watch. 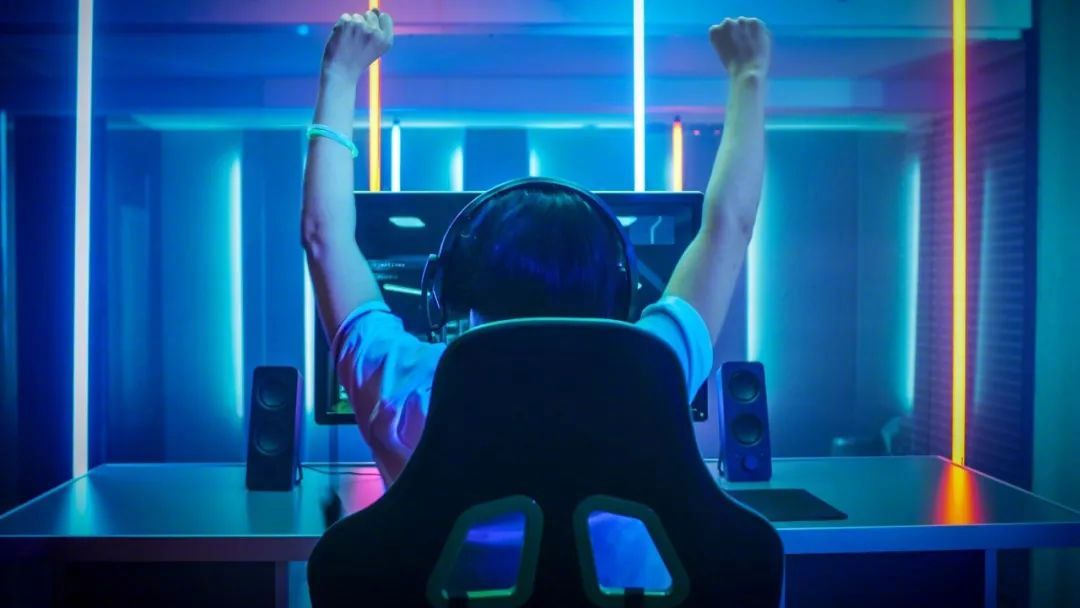 In future e-sports games, multi-screen, multi-view live broadcasting will support another view – players playing on a cellphone (showing the real-time controls of virtual keys such as directions and attacks) – in addition to those already provided. Along with other views of a game, this touchscreen-control view allows gaming fans to learn from top players' moves and improve their own abilities.

Multi-screen, multi-view live broadcasting can be applied not only in e-sports, but also in music concerts, sporting events, and other major events. It brings users a more exciting way to watch and provides operators with more business models supporting pay-as-you-go.

When producing multi-screen, multi-view content, signal collection is not the hard part. The challenge lies in the real-time, high-quality transmission of multiple channels of video signals.

Transmission via satellite or optical fiber either costs too much or takes too long to deploy. The 5G network, however, is the best solution to this problem thanks to its upload bandwidth of over 100 Mbit/s.

The high bandwidth and low latency of 5G makes it easy to transmit ultra-HD videos such as those of 4K, 8K, and VR.

In addition to the games of Hebei Province, Tencent Games will continue to work with Huawei to provide a series of 5G+ multi-screen, multi-view live broadcasting of provincial games held in Henan on August 17 and Shenzhen on August 31, and the national championship to be started on October 26.

In 2011, the General Administration of Sport of China named e-sports as the 78th official sport in China. Since then, the e-sports industry has embraced the best opportunity to develop.

According to the 2016 document No. 832 of the National Development and Reform Commission (NDRC): Notice on Issuing the Action Plan for Promoting Consumption to Drive Transformation and Upgrading, "Implement e-sports gaming and entertainment events. Strengthen coordination, supervision, and management. Under the premise of protecting intellectual property and guiding young people, companies can organize national or international e-sports games and entertainment events." This document paved the way for the e-sports industry to prosper.

The 2019 China E-sports Industry Research Report by iResearch shows that there will be 430 million e-sports users by 2020. 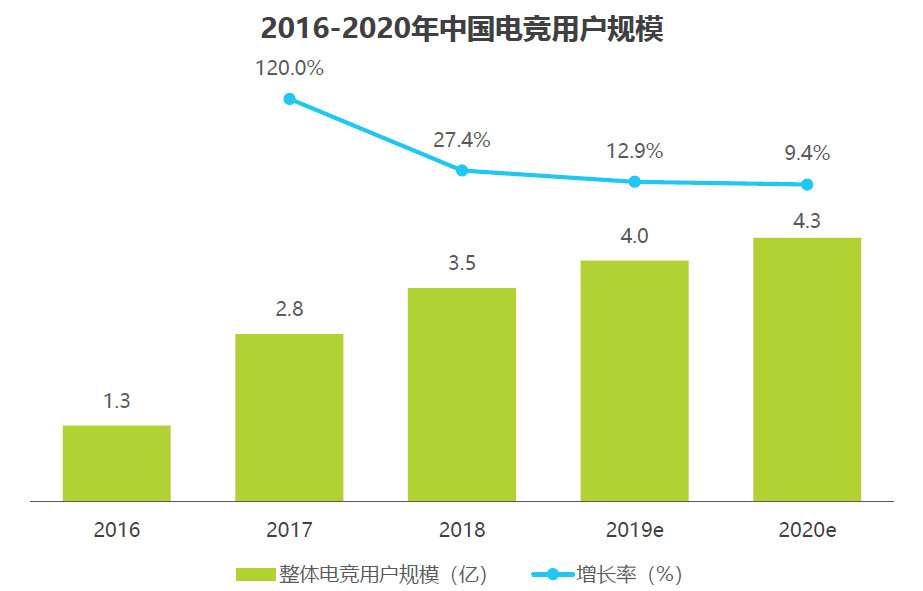 Data from iResearch also shows that the e-sports ecosystem market will be worth CNY37.5 billion by 2020.

The "e-sports ecosystem market" mentioned here refers to expenses other than those spent on playing games, for example, those on watching e-sports live streams.

As a result of the supportive policies, the large user base, and a promising market, a number of IPTV service providers have launched an e-sports section to cultivate this fast-growing market on TVs.

In addition to Hebei Province, e-sports channels have also been launched by IPTV service providers in other provinces and municipalities, including Shaanxi, Hunan, Guangxi, Hubei, and Beijing. 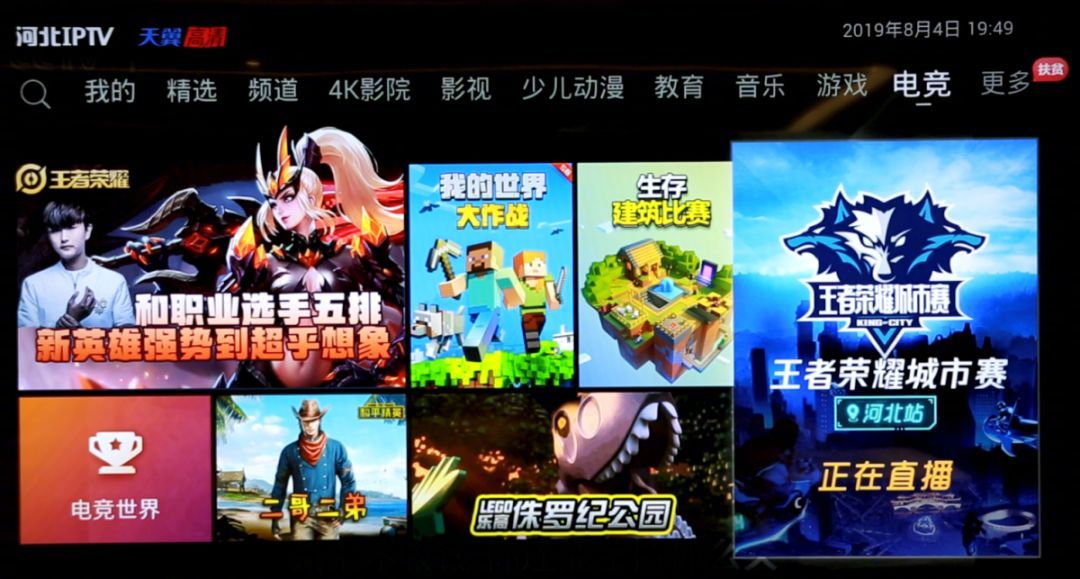 As e-sports sections are launched in more provincial IPTV services, there is every reason to believe that the 5G-based, personalized multi-screen, multi-view experience will attract more users to watch e-sports live streams. This will help cultivate the new section of content into new sources of revenue for operators.